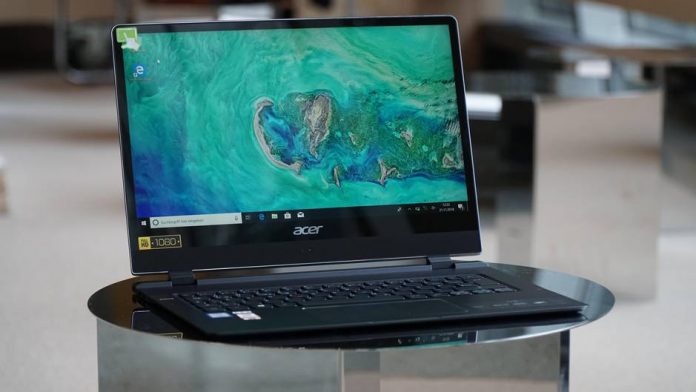 Who wants to buy a new Laptop, you’ll be spoilt for choice. Useful devices can already be had for a few Hundred euros. But these are neither particularly fast nor slim. If you want a store a little in the backpack, therefore, to a Ultrabook. The computers are thin, lightweight, and have life still potent on the inside. One of the most striking incarnations of this type of product, the Acer Swift 7. The manufacturer advertises it as “the thinnest Notebook in the world”.

The height of the matte black aluminum housing is 8.98 mm. So it is a millimetre slimmer than the already slim predecessor. This is technically impressive, the Notebook is even thinner than many Smartphone.

The slim case is an eye-catcher.

Due to the flat design you have to take, however, to be content with less interfaces. On the left side there are two USB-C ports (1. Generation), and a headphone Jack. On the right edge of the housing there is next to the On/Off switch and a slot for a Nano SIM, because the Swift 7 is LTE-capable. Who Jacks a conventional USB or Ethernet, an HDMI port or a microSD Slot requires, a Adapter. However, this is also when most of the competitors of the case.

Commendable: In the scope of delivery of the Swift 7, an Adapter with a HDMI and two USB ports (1x USB-A 1x USB-C) is already included.

The frame around the screen is wider than necessary.

The two most important elements of a laptop are the screen and the keyboard. The Display is a 14 inch large touch screen, it responds so well to input with your Finger. The screen itself is sharp and rich in contrast, however, highly reflective and not particularly bright. Those who often works Outdoors, have a little joy. Has disturbed us twice under the edge of the Display where the Webcam is installed. The is elegant?

The keyboard is backlit, the keys have a pleasant size, so you can tap without a lot of settling in quickly and reliably. The stop is not as hard and loud as is the case with the Macbooks, but soft with a barely noticeable pressure point – which variant a like better, is a matter of taste. The Trackpad is a 12-time of 6.5 centimeters is relatively small, it is also not clickable. The precision of the Macbook Trackpads, it does not approach.

to the left of the keyboard, a fingerprint scanner is located. This works fine and is supported by Windows Hello. Visually, the Sensor fits so right in the overall picture.

The Acer Swift 7 has a fingerprint scanner

The slim design also calls for performance to take their toll. The enclosure has no fan, making the Laptop works nice and quiet, the processor (an Intel Chip of the seventh Generation) is also weak. In terms of performance, the Swift 7, and is about on the same level as the Apple Macbook 12 (2017). For everyday tasks, such as popular Office applications, browsers, and Multimedia services, it is sufficient. In the case of 3D video games, and complex Video and image-Software it is but. The Swift 7 is a computer for people who place value on mobility, and less a full-fledged Desktop replacements.

At the bottom of the notebook, the speakers are located by the way. The are for video calls is sufficient, but any Bass missing. But where the will come from for such a narrow case.

good battery life highlights the mobility of the Swift 7: Eight hours of runtime – so two to three movies at medium brightness on the piece – well worth it. In the case of compute-intensive applications, the battery is faster empty. Is charged, the Swift 7, in just under two hours. It will load the Notebook via USB-C. The corresponding power supply delivers 45 watts, and weighs 291 grams, but still with a chunky cold-device connection cable.

With only nine millimeters the thin housing of the Swift 7 is without question an eye-catcher. The Matt black case looks classy, Details – such as the left side of the keyboard placed finger scanner interfere. Overall, Acer is possible, however, the balancing act from a compact form factor, spacious 14-inch screen (even with Touch) and a full-size, backlit keyboard. The battery life is about eight hours in the good range. The processor is for everyday tasks is not sufficient for Games, Photoshop and co. but not suitable. A disadvantage of the weak boxes, the moderate screen brightness, and the small Touchpad.

it Is recommended the Swift 7? Anyone who values a slim body, a great screen and Windows operating system, even mobile Internet needed, could be with the device happy. A working animal is not to the Swift 7, more of a mobile office computer with the eye-catching qualities. With 1300 Euro, however, it is no bargain.

read more Tests:iPad Pro in the Test: this Is the Computer of the future?Fire TV Stick 4K in the Test: Because of this Features it is also worthwhile for Smart-TVsiPhone XR: Same in Yellow?Apple Watch Series 4: This watch is stealing the iPhone of the Show!Sonos Beam: well, the Alexa is-Soundbar hero 7 Black tested: This camera could save Gopro