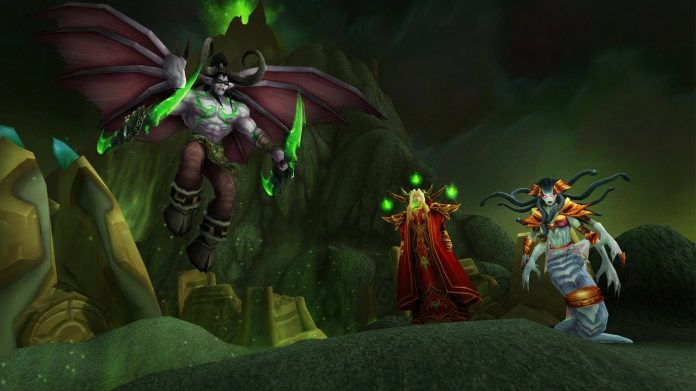 Players trying out the next stage of Burning Crusade Classic discovered that it was impossible to use the “/spit” emote against other players.

World of Warcraft: Burning Crusade Classic’s next update is now available on the game’s Public Test Realm. This allows players to try out two new raids, Serpentshrine Cavern, and Tempest Keep. It also includes features such as guild banks and a group browsing tool.

In the test patch 2.5.2, the game seems to be missing an emote. This is the /spit-emote directed towards other players. Players have been able, since the launch of Blizzard’s MMO, to spit at characters or players by typing /spit. This no longer works in the current PTR build. However, players can still use emotes on the ground.

Blizzard did not comment on the changes, and the emote is still available in the current Burning Crusade Classic version as well as the Shadowlands expansion. This leads players to wonder what the reason for the change. WoWhead suggests that it could be due to players harassing players who have purchased the digital Deluxe Edition for Burning Crusade Classic. This bundle of microtransactions includes a level boost as well as a brand new mount that was not available in the original Burning Crusade.

A recent statement from Activision Blizzard CEO Bobby Kotick, released in the wake of a state of California lawsuit documenting a history of sexual harassment and discrimination at the studio, states content deemed “inappropriate” would be removed from Activision Blizzard games, but didn’t expand on what that might mean. A separate statement from the WoW development team states it would be taking action to “remove references that are not appropriate for our world.”

That statement seemed to refer to the removal of NPCs and items named after former WoW game director Alex Afrasiabi, named in the California lawsuit as allegedly having a pattern of sexual harassment. Activision Blizzard has since confirmed that Afrasiabi was fired from the company in the summer of 2020 for misconduct, and items and NPCs related to him have since been removed from the most current version of Shadowlands, though are currently still present in WoW Classic.