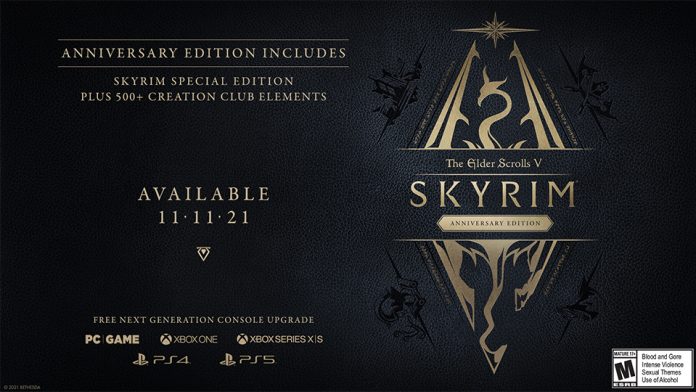 During this time, the Skyrim Special Edition free fishing update will include some Creation Club extras.

During Quakecon, Bethesda announced that it would release Skyrim Anniversary Edition on Skyrim’s 10th birthday, November 11, providing an opportunity for memelords to dust off gags about its endless cycle of ports and rereleases once again. The Anniversary Edition will include “over 500 unique content from Creation Club” and Skyrim Special Edition users can upgrade to it. Skyrim Special Edition will get a fishing update. This update will allow you to “grab a fisherman’s pole and do some fishing quests”.

Bethesda have now given out some more info about both the Anniversary Edition and the fishing update, as well as its other plans for the RPG’s birthday. First, Skyrim Special Edition players will not only get fishing, but two paid mods from the Creation Club will also be joining the group for free: Survival Mode (an optional difficulty mod that adds hunger and fatigue to the game, as well as limitations on fast travel, health regeneration, and carry weight) and Saints & Seducers, a quest mod that is based on the Shivering Islands, which also contains Rare Curios, which brings back ingredients from Oblivion and Morrowind.

The Anniversary Edition will include “all 48” creations currently in the Creation Club as well as 26 new creations. The claim that there are “over 500 unique content pieces” is based upon breaking down these creations into “individual components such as quests and items, armor, houses, etc.” This includes everything, from pet foxes and nix-hounds to new weapons, clothes, and the return of old favorites such as the Gray Cowl or goblins.

You could of course just download a selection of the best Skyrim Special Edition mods to achieve a similar effect, and not have to worry about how the only way to disable Creation Club stuff you don’t like is to manually delete the .esl and .bsa files yourself.