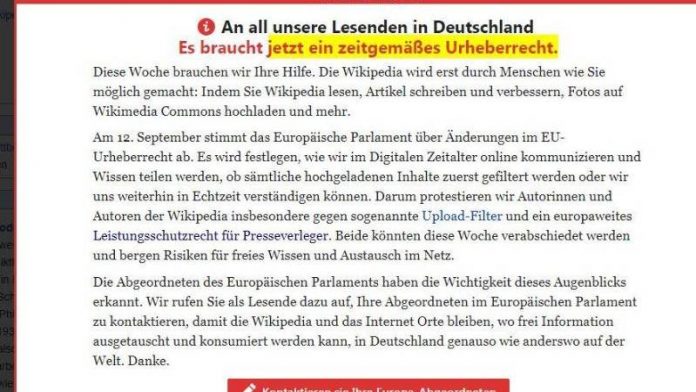 The German Version of the Online encyclopedia Wikipedia is set to go on Thursday to Protest against the planned EU copyright reform for an entire day offline.

“For the first Time, the German-speaking Community of authors is to perform a complete shutdown,” it said in a blog post the Wikimedia. Several other language versions may follow this example, or the Banner on the main page. The reason for the Protest was the planned copyright reform on Tuesday in the European Parliament to be voted.

The Wikipedia authors fear significant restrictions imposed by the planned Reform. Referring particularly to the highly controversial article 13. “Even the smallest Internet platforms would have to bind the copyright violations of their users, and User preventive, what Filter would be, in practice, only by means of error – and abuse-prone Upload feasible,” – said in a Text to be published on Thursday on the Wikipedia page. “In addition, all sites would need to acquire for short text excerpts from media articles licences, to a new publisher to comply with the law,” it said. “Both together could compromise the freedom of expression, art, and freedom of the press.”

The Wikipedia itself is exempted from article 13 of the new copyright Directive. Nevertheless, the fear of the Community, “will suffer the Free Know even if Wikipedia remains an oasis in the filtered desert of the Internet.”

The German-language Wikipedia currently contains nearly 2.3 million articles and is about 30 million Times a day. Worldwide, Wikipedia, according to his own information on space 5 of the most-visited websites in Germany on 7th place.