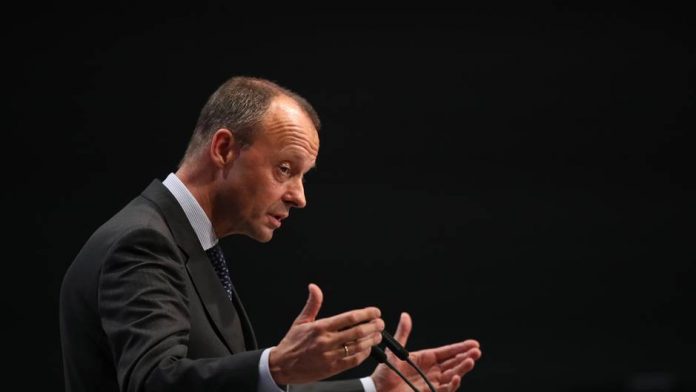 As a dove, flew in from the Off by breaking news in the middle purely in the conferences of the capital editors, who had just recently learned of Merkel’s waiver of the CDU chairmanship and they put their heads together to consult as to what that would mean for the reporting of the coming days and for the coming months and in General for the country and the world, since it made from all directions, “Pling!” and disbelieving eyes met: Friedrich Merz?! Really now? Where … why not?

In the political Berlin was Merz, with his wide-legged economy, liberal-social-CTS innovative style that reminds so much of the Pre-Merkel Era, hope for a real political competition – what we have all experienced for a long time.

Friedrich Merz has) quite a bullshit talking

Now, but one has the feeling that Merz is losing its Momentum, that this Merz is talking a bit too much nonsense, than to think of him seriously as a Chancellor (and with this, the CDU-Chairman-election, Yes! could imagine. Most recently, he has talked a lot of nonsense about the right to asylum-a fundamental right.

Merz gave two reasons why he wants a debate on article 16a of the basic law: Because Germany is the only country to have such a fundamental right in the Constitution; and because the articles of the European regulations in the way.

the Former is wrong, Italy has just such a fundamental right is another country so that out of its fascist past and wanted to learn (however, the impression one has at the Moment, sometimes, maybe not so much learned). The latter is not true because European rules on article 24 of the basic law in the German legal system.

Even if Merz’ arguments are wrong – Merz is right when he says that we must have a debate on article 16a. Because he must be in the original state of the article 16 paragraph 2 of the back – since everything was in there, what is an asylum basic law: “persons Persecuted for Political reasons enjoy the right of asylum.” Point. Finished.

Everything else – that was the idea of the article – would result from international law and international agreements, as it is today de facto the case.

The asylum law, has a simple

in 1993, article 16, paragraph 2 was changed after months of fierce dispute. The basic law was so frayed that it is practically not a single immigrant more – under two percent of the recognized refugees get asylum, according to the new article 16a. Virtually all of the other residence permits are based, indirectly, on international law.

analysis of the basic law, which is Why Friedrich Merz’ asylum debate is superfluous and what is actually going on, Daniel desert mountain

Now it is, in fact, that the European asylum system works in its current Form – keyword Dublin-agreement – bad. The German asylum reason, but it is not right to blame – but national egoism and the excessive demands of the European institutions.

You can argue that the provisions of article 16a does not need to be changed, because in any case, European rules apply. However, the rule of law principle of clarity and comprehensibility of the legal standards required. The must all the more be more suited, the less of an Affected special factual or legal customer can be expected – in this case of immigrants, for whatever reason, you came. Self scientific exam candidates fail regularly to the peculiarities of article 16a of the basic law and all related laws (act on Asylum, immigration law, integration law, the skilled workers immigration law), since the article is only from the intricate history of the right to asylum in Germany understand. The law of the state? Hardly.

You can also argue that article 16a should not be changed, because he became as an independent subjective right already practically useless, if you take a look at entitled to the extremely low number of actual Asylum. However, the humanistic spirit of the basic law. A Constitution not least making an important statement about the fundamental values of a society – and this includes that Followed will enjoy our protection.

+++ read on the topic also in the star: “Why Friedrich Merz’ asylum debate is superfluous – and what it is actually” +++

A proposal: At the end of a debate on the asylum-a fundamental right should be to article a slender Constitution:

(1) Politically Persecuted enjoy the right of asylum.
(2) This right may only be by law restricted.

This fundamental right would be complemented by a sleek, uniform, transparent and comprehensible law on immigration – the immigration controls and Integration organized. We should do Friedrich Merz to the Fallen, and a debate – he can participate from the Off.