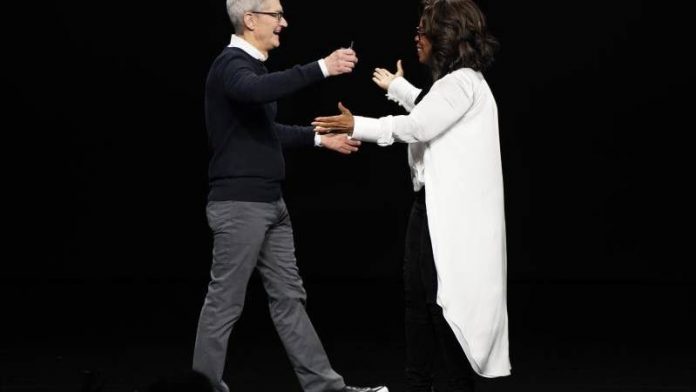 light, light – and suddenly Steven Spielberg is for a few minutes on the stage at the Apple Event at the company’s headquarters in Cupertino.

Again, light off, light on – now the Hollywood Stars Jennifer Aniston and Reese Witherspoon. The reason: Apple announces a subscription offer with series and films from our own production.

The big names to set a sign for quality. In front of it were presented at the Event on Monday already subscriptions for media content and games – and initially only for the US market, a Apple credit card. It is the summer, not only virtually on the iPhone, but also as a real card made of titanium instead of plastic. The issuing Bank Goldman Sachs is considering, with time, internationally.

Apple earned its money so far, especially with the sale of devices. However, it is clear that the periods of rapid growth in Hardware are over. Now, the group wants to do more business with about 1.4 billion devices are already in circulation.

And also: Apple’s new TV App is coming to TVs from Samsung, Sony and LG, as well as Streaming boxes like Roku and Amazon’s Fire TV. So the Apple softens even further, the former strategy to make the services, especially his own devices more attractive, because they are only available on them. As in the past, Apple promises, but strict privacy policy to its customers.

Many questions remain after the presentation on Monday is still open. So no subscription-prices for an “Apple TV” (or Apple TV+ in the notation of the group) and the Games offer “Apple Arcade”. Both should be available this autumn – the Apple so you still have time to fine-tune a business model. In media reports speculate before about the possibility of a bundle with subscriptions to various Apple services. Maybe Apple does not want to give but also only rivals such as Netflix to the early insight.

At first glance, Apple’s own Streaming offering is still no danger for the present-day top dogs, Netflix and Amazon. Mainly because of Apple’s hand-picked selection from some of the dozens of projects in the TV Boutique HBO as to the “something For everyone”principle of Netflix reminds. But at the same time, Apple TV Plus “” in more than 100 countries. And Apple’s TV plans go far beyond the range of exclusive Streaming content.

Because the company wants to make its TV App to the location on the remote is seen. To do this, you can also subscribe to paid channels like HBO or Showtime and use. For other countries, Apple promises to local deals. The role of the program guide is to take personalized suggestions based on previously well-respected programs.

Similarly, it works with reading proposals for “Apple News Plus”, the subscription offering access to 300 magazines and some Newspapers, but it is totally unclear when and in what Form it could come to Germany. With their participation in a variety of media, the bet that a share of Apple’s subscription price of 9.99 dollars a month is worth the risk to lose the business with their own subscribers. Especially since according to the media, half of the reports from the subscription-price at Apple.

The New York Times and the Washington Post decided that this works for you. The “Wall Street Journal”, the subscription costs around $ 40 a month, makes with and want extra set for additional journalists. As it is, is to be presented in the Apple-App is mainly a selection from the articles in the newspaper, although you can find with a little effort, the Rest of it. On the other hand, can make use of the “Wall Street Journal,” hopes to win new readers among consumers, while a lot of subscriptions run traditionally, the cost of eh on the company.

another open question is how much the whole of the subscriptions can also contribute to Apple’s business. As Morgan Stanley estimated that a bundle of offerings, from music and Video could bring up to 2025, an annual amount of more than $ 22 billion. This number is in a different League than the iPhone-business. In the end of September closed the last fiscal year, the iPhone brought in a turnover of 166.7 billion dollars. The entire Service Department came to 37.2 billion dollars, with a strong increase of 24 percent.

TV-Talkerin Oprah Winfrey brought straight to the point, what Apple does for Hollywood, Games developers and media attractive: “Because you are one in a billion pockets.” However, in the Streaming service Apple Music, also direct access to hundreds of millions of users makes an offer to a self-runner. After the Start in the summer of 2015, Apple Music has, according to recent data, more than 50 million paying subscription customers. The market leader Spotify, it was at the end of last year, 96 million – plus 116 million users of a Free Version on the Apple dispensed with.