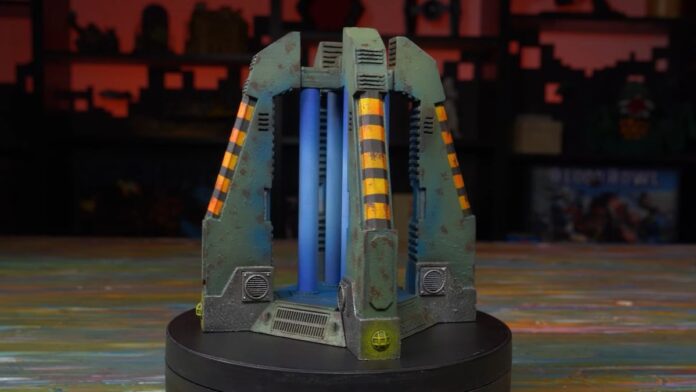 I have only ever played Warhammer 40,000 once in my entire life, but I’ve seen many more from the sidelines. A bit of beautifully modeled and painted terrain can be just as captivating as a horde tyranids or ork characters. A Warhammer fan took his love of Warhammer 40,000: Dawn of War real time strategy game to the next level by 3D printing terrain models from the game for his tabletop battles.

Jay from Eons of Battle shared the details of how he constructed his Dawn of War terrain using Youtube. To establish scale, he started by taking two of his favorite building types from the videogame: the tall plasma generator, and the wide stronghold. Amateur voxel artist, it is easy to understand the difficulty of scale calculations, not to mention having to follow Warhammer rules. Jay had to abandon most of his calculations because the videogame scale is different than the tabletop version. Here, height, width and length can be crucial in many terrain-focused strategies.

Jay used 3D modeling software such as Blender and Vectorworks, and then a 3D printer to model the Dawn of War terrain. He also added a lot of artificial damage to each surface. This further supported his belief that the fictional battlefield had witnessed generations of warfare between Imperium of Man, the orks, and was now ready for printing.

Jay spent approximately 25 hours painting each piece of terrain and detailing it, as you would expect from professional Warhammer 40k painters. Dawn of War’s plasma generators got a healthy blue glow from some interior spray paint. Even the exterior lights of the stronghold were given a little bit of putrid green spray to make them look more illuminated.