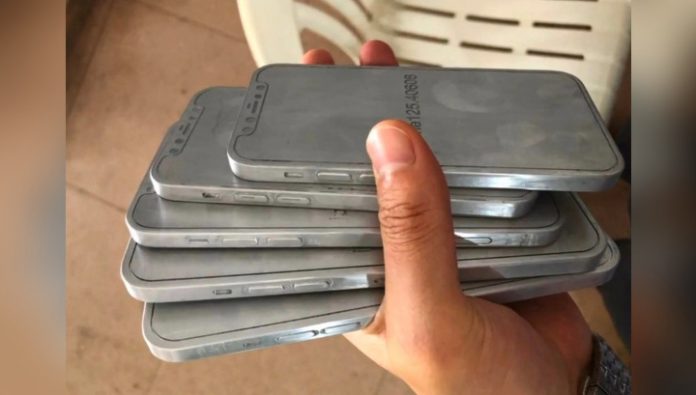 the Photographs published on the weekend, allow us to better imagine what will be in the hand of a future iPhone in a new design with rectangular faces. The photo was lit all four models that Apple is expected to introduce this fall.

Images of the metal iPhone 12 models with screen sizes of 5.4, a 6.1 (version 2) and 6.7 inches appeared on Twitter account @Jin_Store. There’s also posted screenshots of the CAD drawings of the devices for 3D design.

The sides are squared off, just like the rumored #iPhone12 #iPhone12Pro pic.twitter.com/u2lg4pcxSV

typically such drawings and layouts demanded by manufacturers of cases for smartphones, as they allow them to pre-design the accessories for future devices. In this case, the leak confirms repeatedly the appeared messages about the transition in the line of Apple iPhone design in the spirit of the iPad Pro – with flat side faces intersecting the front and rear panels at a right angle.

At the same time, not all details in the photo can match the final version of the smartphone. For example, since the shape and size of the “bangs” above the screen for the design of the case is not important, they in the end may not be the same as on these layouts and drawings. Many hope that the size of the ledge at the top of the screen in the new iPhone, either a decrease or Apple in General will be able to place all the cameras and sensors in the bezel, making display continuous.

do Not take into account the layout and the appearance of one or more of the older iPhone models 12 ToF-camera, giving the device a three-dimensional “vision” and to better “see” the surface. This camera on the last iPad Pro significantly extends the capabilities of AR applications.