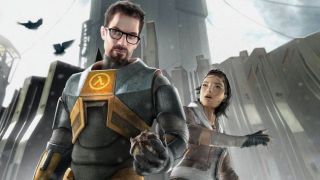 In an event called “Breaking the Bar”, the Half-Life community decided to rally together and get as many concurrent players together as possible. Everyone who wanted to participate had to run and play Half-Life 2. Streamers would also be participating to increase attention. Although the reasoning may be a bit more complex, sometimes it is necessary to unite behind something. They reached a peak of 16101 concurrent players at 3.30pm with additional 8,630 viewers on Twitch.

Interesting fact: Half-Life 2 is actually quite old. __S.7__ They had to beat 6,882 concurrent players, which was more than twice their goal. However, we don’t know how many people played Half-Life 2 in 2004. Are there ever been more than 7000 concurrent users before? This is just one of the many life stats that you can be forever curious about.

It is perhaps even more remarkable that 16 years after the game’s release, a community has rallied around it. It’s not the only such community effort, either: Half-Life 2: Remastered Collection was recently listed on SteamDB, and is an in-process mod from the same group as did the Half Life 2: Update mod.