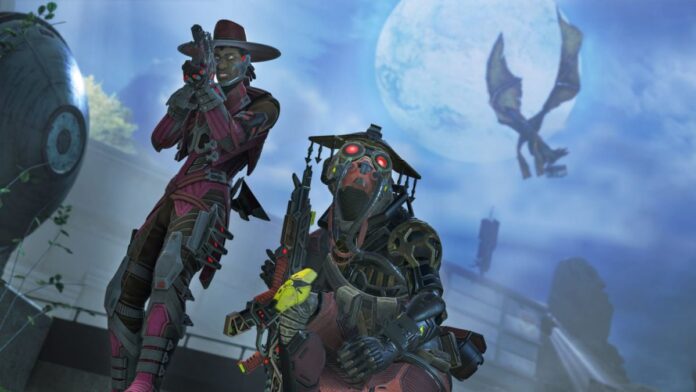 Vampires and werewolves face off in a new Arenas map.

You thought Apex Legends was safe enough to try and climb through ranked matchmaking. But, Respawn announces another year full of Halloween celebrations. This year, the Monsters Within event will see our beloved Legends unleash their darkest side.

Monsters Within was announced this afternoon. It not only brings in a new batch of Halloween costumes, but also introduces a brand-new arenas map. Encore, named after the new Legend Seer, features an open stage for performances and a VIP lounge that allows you to showcase your best plays. Although it’s not very scary, after my strong showing with Overflow, I was excited to see more custom Arenas maps.

It wouldn’t be Halloween without some spooky makeup, and this year’s costumes feel much better than previous years. Revenant, an already scary skeleton man has a werewolf skull bursting from his robot skull. Caustic’s stomach features a tiny alien controlling the gassy doctor as a fleshy meat-mech.

Even Horizon, my dear friend who often complains about her naff clothes , is now out swinging in a creepy extraterrestrial infected look.

Monsters Within will kick off on October 12, which is a slightly less scary date. The event’s final week, which begins October 26, is a bit more scary than usual. Shadow Royale, a limited time mode, will be available on the midnight version of King’s Canyon. Shadow Royale is a regular battle royale mode that allows you to come back to life as a shadow-form and respawn endlessly until your last non-shadow opponent.

Monsters Within should avoid the real horrors of Apex’s previous event. The Evolution Collection Event somehow destroyed the game’s network infrastructure. Monsters Within will be available until November 2, when we’ll probably discover the 11th season of Apex Legends.