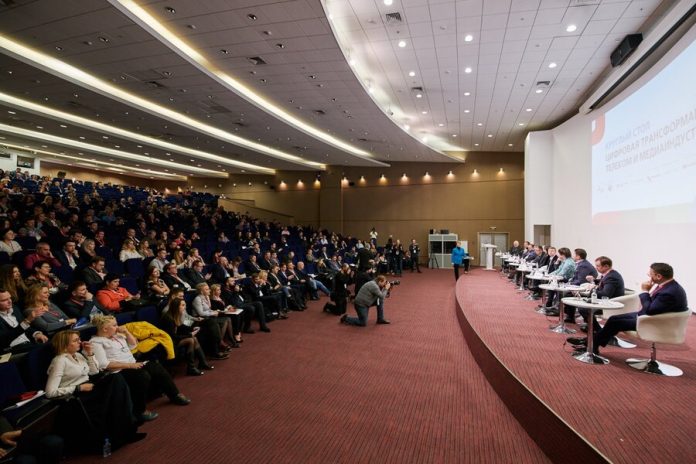 C 28 to 30 January in the international exhibition and forum CSTB.Telecom&Media’2020 in “Crocus Expo” meet the experts pay-TV, Telecom and media industry to discuss trends, prospects for the development of new formats and the role of innovative technologies in the formation of a new image of the Russian TV.

the Forum will consist of two main streams – “Technologies and services” and Content Summit Russia – which will precede the plenary round table “global ecosystem of video viewing”, organized with the support of “Media and Communications Union.” Will be moderated by Xenia Boletzky (“Vedomosti”).

the Roundtable will include two parts with different orientation. To participate in the first invited Alexander Zharov, Roskomnadzor; Alexey anichin, “national Media Group”; Alexey Krasnov, “Gazprom-Media holding”; Diana samoshkina, Rostelecom; Ksenia Achkasova, Mediascope; Rafael Abramyan, Rambler Group; Mykola Orlov, Tricolor. Experts will examine key industry issues: the development of the Russian television and media market, changing the habits of consumption of video content and the future of television viewing, the development of anti-piracy initiatives and the results of the fight against piracy in 2019, and the current situation in the field of television and media evaluation.

Forum “Technologies and services” will open a discussion panel, which will discuss the development of high definition formats and Marmarket instruments for their promotion. Discuss the following questions: demand creation and monetization of UHD, content ROI, growth drivers and restraining factors of the market. The speakers will be representatives of TV channels, operators and the largest Russian providers of digital services (Rostelecom, ER-Telecom holding “First HDTV”, “Russian Extreme” TV and radio “Start”, GS Group, Tricolor). Continuing the theme of the session “New life broadcast technology” experts from Huawei, the Russian football Union, JSC “Rostelecom”, LLC “NPO Perspektiva, Irdeto, Sport360.tv will talk about how recent developments will affect the future of business UHD, and what technology trends will dominate in the near future.

Another panel discussion will be devoted to modern challenges for satellite operators in the era of industry 4.0. The TV adaptation to the new technological reality, multi-service platform operators of satellite TV, competition, ecosystems 5G c traditional environments are the main themes of the meeting. Invited to participate representatives of the group “Orion”, Eutelsat, FSUE RTRS, STV, tri-color, satellite television “NTV-Plus”, SES in Russia and the CIS. Partner of the event will be the FSUE “Space communications”.

a Separate session will devote “to Improve the business efficiency of the channels through additional services.” Co-organizer of the event: group of companies “Orion”. Experts from J’son & Partners Consulting, SPI International, Telemarket, group of companies “Orion” will tell about new services, interactive tools to increase the profitability of TV, HbbTV, technical solutions and trends in the TV equipment. The question of interaction of the channel with the audience will make a separate discussion which will be attended by the speakers of GK Orion, Telemarket, CTC Media, TV company “NTV”.

the Status, problems and prospects of the market of regional operators will be given a separate session, which will bring together regional operators and representatives of profiling organizations (Association “to Rostelesat”, Department of infrastructure projects of the Ministry for digital development, communications and mass communications of the Russian Federation, Ordercom, Ufanet, Lanta, Traytek, the Association of alternative Telecom operators, GK “Capital cable network” Roskomsvoboda, the Center of digital rights, Telis Company, Consumer Internet co-op “RV-19”, IPTVPORTAL, “stream labs”, RDP.RU, LoudPlay). Here will discuss, including legal and administrative risks of the operators, the competitiveness in telecommunications at the example of IPTV solutions, organization and Economics of the cloud broadcast, the behavior of the subscriber, business diversification and new sources of income.

the Forum Content Summit Russia will open the session “TV and video”, moderated by editor media “Vedomosti” Xenia Balicka. For a start, the analysis of consumption of TV and video content in 2019 from Mediascope, and more – panel discussion “the Traditional TV and the competitive environment”, participation in which invited the top managers of Rostelecom/Media Telecom, “First channel”, “First channel. World network”, TV company “NTV”, Tricolor, Media Broadcasting Group, UFC Russia. The event will conclude with a presentation of “Production of animated content for different environments”.

At the session “Marketing case studies for promotion of content” (moderators Yana Belskaya, the cable Guy and Regina Yurkina, the Media) will consider the most striking examples of effective promotion in the format of the presentations along with the Fox Networks Group, MTS provider “Intersvyaz”, broadcasting company “First HDTV”, Tricolor.

CSTB.Telecom & Media’2020 is a key event of the industry of Telecom and media, the only practice-oriented area, where you can hear the point of view of the market and the state, learn how to transform the business for its further development, to receive advice from leading industry experts.

CSTB.Telecom & Media‘2020 is supported by the Ministry for digital development, communications and mass communications of the Russian Federation, Roskomnadzor, CCI, MCCI.

Registration is available at the link.