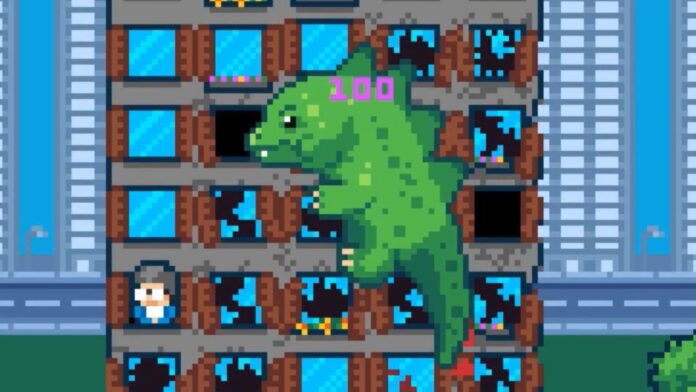 Do you recall the glory days of sliding quarters into Rampage in those golden years? It was renting Rampage: World Tour repeatedly from Family Video, and then inserting it into my N64. Since I didn’t understand what memory cards were, it didn’t matter that the console was turned off. It’s strange that the “monsters destroying 2D cities” genre didn’t take off like Doom shooters and point-and-click adventure. Our only solace has been the better-than-you’d-expect 2018 movie with Dwayne “The Rock” Johnson.

Terror of Hemasaurus is a smashing game. You’d expect it to be a retro-style smash-em-up in which you and your friends unleash giant kaiju creatures on an helpless population. You play the Reptar-like Hemasaurus and the similarly lizardlike Salamandrah. The time-bending “Clocksloth” and the Autonomous Hemasaurus are all kaiju villains.

This is a great idea, but it is essentially a way to get around on foot and stomp on buildings. Hemasaurus has been released from the Church of the Holy Lizard, and is now instructed to educate humanity about the climate disaster. It’s not too late, huh?

Hemasaurus is a beautiful evolution of the Rampage method in action. You’ll run through the streets, climb up towers and consume your fair share helicopters. The thing I love most is the 20-years of technological advancement since the Rampage games. Salamandrah releases fire from his mouth, burning a building’s exterior. While Autonomous Hemasaurus climbs an especially large tower, it starts to break in half and fall apart window-by-window, instead of the simple straight down drop of the Rampage games.

Clocksloth’s Bullet-Time is perhaps the most hilarious. He claps his hands together and slows everything around him including missiles and falling people.

Loren Lemcke is developing Terror of Hemasaurus. You may have seen him from Super Blood Hockey or Over 9000 Zombies. It will be available on Steam and all major consoles “early next year”.