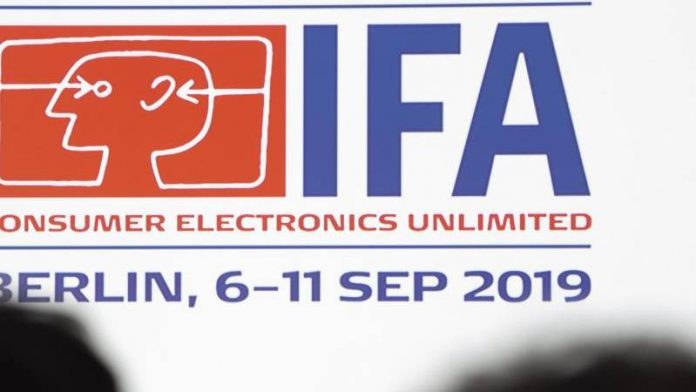 at the beginning of September turns under the Berlin radio tower, traditionally all consumer electronics. Many of the priorities of the technology fair IFA of the year-to-year, but there are some features:

MORE PIXELS: In most of today’s TVs, the 4k resolution is one of the points, with four Times more of the picture than HD Standard. This year, giants such as Samsung, Sony and LG TV are expected at the IFA stands of the industry-devices with even sharper 8k image will be in focus. Especially the Japanese industry wants to establish the technology in the context of the summer Olympic games in the coming year. However, in Germany there are even 4k content, especially in Streaming services, or selected Transmissions by satellite – but hardly in the classic TV program. And while the industry the expensive, Top-indented at the fair, like the models in the center, dropped the average price of in Germany, purchased TV this year by 8.7 percent to 564 euros.

CONNECTED HOME: With more and more networked devices from the light bulb to the washing machine, the Smart Home is a Vision a real possibility. However, simple functions such as the control of lamps or sockets with the help of language assistants were in the past. In the fast-growing business with networked loudspeakers, the first signs of saturation are visible: its sales fell this year, according to Figures of the industry, company gfu by 9.3 percent to 546.000 devices. In this case, the supply just grows: industry pioneer Sonos wants to reduce, together with Ikea the price for high – quality Sound and Hi-Fi classic Bower & Wilkins is testing the market with a Streaming pair of speakers for around 4000 Euro.

5G: The IFA offers Smartphone providers and network operators a Chance to demonstrate to consumers the benefits of super-fast 5G data transmission system. However, the Expansion of new networks in Germany is only at the very beginning. “Currently, 5G is still far from a mass issue, there is still a good offense for a year,” says Roman Friedrich, an Analyst at the Boston Consulting Group. To expect new tariffs of network operators but. “The rates are expected to be at the speed coupled, not to the Download volume.” The provider should try first, especially cash-rich customers.

COMPUTER UNDER THE radio tower: The PC market has caught up after a long descent last, however, mainly because companies, in view of the expiry of support for the aging Windows 7 is still fast on Windows 10 require. The industry wants to use the IFA to benefit from it and also to make consumers, the new devices tasty. So Microsoft shows a new model of the Surface Hub, an interactive whiteboard designed specifically for Team-work in companies and Start-ups. Acer presents for the first time in Germany its new range of Concept D, the high-performance Desktop PCs and Notebook models specifically designed for the graphical demands of Creative.

HOW MUCH IS NEW, REALLY? Big innovations can be expected on the IFA, however, hardly appreciates Boston-Consulting-Analyst Friedrich. “We will not see any technological breakthroughs.” In many areas, such as the Smart Home, or in the case of Virtual Reality, the industry must create it now, to address a mass market. “Both VR as well as the Smart Home are currently, unfortunately, still in a manageable framework.” For example, Augmented and Virtual Reality would be a “wonderful subject” for the IFA, this is evident in all facets demonstrate – from the Gadget, Gaming and education to industrial application.

Reuters topics in this article, IFA Germany electronics Berlin Streaming radio tower Samsung Sony TV-devices-Consulting-summer Olympic games TV program BCG FBI takes a New in Digital piracy “More on offer than Netflix”: illegal Streaming service Jetflicks high By Malte Mansholt display star travel worlds, American Football live – journey to the NFL in the USA consequences of the trade war shock for Huawei New Smartphones coming may without the Google Apps A Test of five winners From sports companion to a Noise-Canceling: These five Bluetooth headsets recommended were test By Malte Mansholt, the end of The Binging? Why is the Streaming services from Disney and Apple, our Netflix change habits, want Of painted Mans Reportage exhibition get in Cologne My day at Gamescom: Why the game show is a crazy getaway from the everyday arms trade network With these absurd Tricks are traded muffler online from Amazon a New mobile wireless standard 5G Large investigation of the Stiftung Warentest: Is mobile phone radiation dangerous? Streaming Netflix and Amazon Prime in September: two new series Of painted Mans Apple Smartphone booking of the new iPhone brings is now possible to Test Bigger, faster, sophisticated Galaxy Note 10+: The best Samsung Smartphone for years By Malte Mansholt 40 new Levels of Mahjong – free to play! Test Galaxy Note 10 play+ in camera comparison: it’s the Turn of Samsung’s new Top model From the Malte Mansholt network-Trend Instagram, you are not on our photos! Pink and other parts of the chain letter is bringing what? By Malte Mans excavation brings dead heads and love spells – magic tool of a sorceress from Pompeii, discovered gems Of Gernot Kramper excavation and the skull of a servant of Pompeii DISQ Partner – and Single-stock markets pulled in the Test: Only two, can convince By Malte Mansholt Ransomware “Coordinated attack”: hackers blackmail 23 cities at a stroke Of Malte Mansholt mobile bill 125 euros for nothing: “financial test,” warns of phone Scam By Malte Mansholt