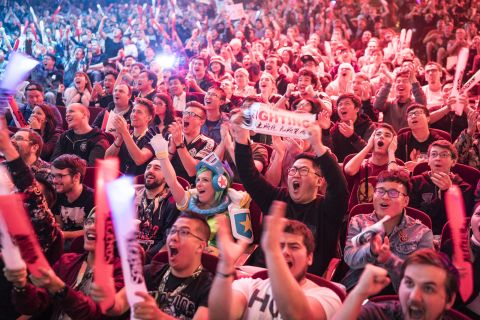 Players is a new series from American Vandal.

A new mockumentary series called Players will follow the travails of a fictional League of Legends team as it struggles to claim its first world championship after years of failure. There isn’t much in the way of detail at this point, but a Variety report says the series will focus on an unlikely pair of players–a 17-year-old phenom and a 27-year-old veteran–who must put aside their differences, and egos, and work together to bring home the gold.

Mockumentaries can be described as documentaries. However, their subject matter is often completely fictional. One popular recent example is the American Vandal series on Netflix, a parody of true-crime documentaries about a guy who draws dicks on cars. Players’ creators, Dan Perrault and Tony Yacenda, will also serve as executive producers.

Riot Games was also involved in the production of this series. The Variety report lists Riot Games as an executive producer, but not individuals. This could give Players an extra layer of authenticity and open the door for LoL teams to take on background roles.

The built-in audience for Players is impressive too: According to Reuters, the total combined viewership of the 2020 League of Legends World Championship was just shy of 50 million. Who knows? It could even be great: Although I wasn’t expecting much from Mythic Quest (Rob McElhenney’s comedy series about the game studio that makes the most popular MMO in world), it turned out to be quite entertaining and was re-aired for a second season in May.

Players is being developed for Paramount+ and doesn’t have a debut date set at this point. Riot has been contacted and I will update this post if I get a response.