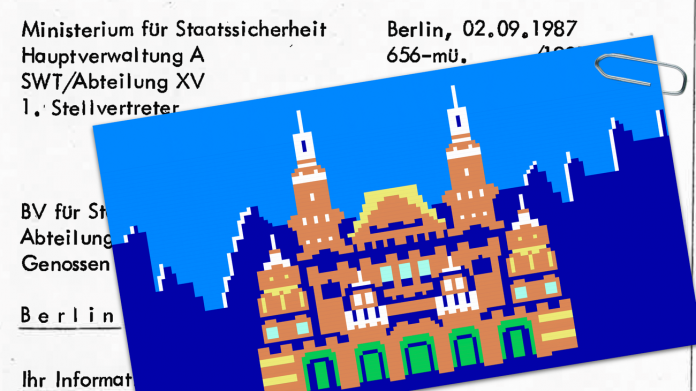 Read this article in English.

6. January 1988 was one of those Wednesdays where a lot was going on in the old Baroque buildings in the monastery road in the Eastern part of Berlin at the time, the name of the house of the young talents (HdjT) wore, and again today the Palais Podewils is, according to its former owner, the foreign Minister of Frederick the Great. 70 to 80 people crowded on that winter day, in the room on the first floor, in the Omnibus-the choir was rehearsing. On Wednesday and met there the members of the computer club. It is mainly young people, most of the 20 years old, some only 16.

Although there were in the eighties in the whole German Democratic Republic, these Clubs (which were mostly written with a “k”), solely around 20 in East Berlin. But came to the Meeting in HdjT, people travelled from far and wide. Because even though it was the Central club-house of the socialist youth organization FDJ, there were on the tables in the GDR-produced Computer. But what from the West.

On this January day about a C128 and two C64 in the US-manufacturer of the Commodore, in addition to the floppy disk drive were built. The DDR-Computer of the KC 85 of the people’s own enterprise (VEB) mikroelektronik “Wilhelm Pieck” Mühlhausen, and KC 87 of the VEB Robotron would not have accepted Stefan Paubel, who had founded the computer club in the HdjT in January 1986 and then opened, also. “The KC 85 was not really so great, therefore, I have asked the leadership of the HdjT, if we can’t use Western technology,” says Paubel today. “Curiously, the Director immediately, and I have two C64 and a floppy disk drive in the Köpenicker -, and the sale concerned.” 25.000 Ostmark Paubel was the total spend for the equipment, 6.500 Ostmark he paid per C64.

The Commodore-a model of the then world’s best-selling home computer. However, it would have gone to the West, were not supposed to find the computer even made their way into the GDR. Because micro electronics booth at the 1988 still in force, the embargo list in the Coordinating Committee on Multilateral Export Controls (Cocom): The Western States were obliged, not to provide technology goods in the socialist countries of the Eastern bloc. The C64 came, however, the Embargo is over in the GDR, and the customs let it happen. Western Hardware was allowed to be introduced. In the case of Software and particularly of computer games was different. The contents of employees of the state institutions of the GDR.

graphic programs, however, is not so, and for those interested in Stefan Paubel. He had studied mechanical engineering, the mid-eighties, his enthusiasm for computers that are discovered and therefore the Club was founded. At the Meeting of the HdjT he gave lectures, about graphics software and programming languages. In 1988, Paubel, in comparison to the mostly young visitors, the enthusiasts for C64 Games was relatively old, with its 34 years.

“at 16.45 A. entered the room of the computer club”: avulsion of one of the reports to the HdjT

One of the 6. January 1988 the Club was held Paubel, however, for disciples, for “approximately 25 to 30 years, Beard, metal-rimmed glasses”. So Paubel is described in a on the 12. January 1988-dated Operational Information of the Ministry for state security (MfS), GDR-secret service: The MfS had sent an Unofficial employee, briefly, to the HdjT, so that as he looked around there, and the people mixed. The IN himself was a young man, and a nominal squad of the guards regiment of the National people’s army. That could mean that he was actually a soldier. The squad was in the GDR, but also the term for a candidate to a Post. For the young man who was, apparently, even students could have, with his mission in the house of the young talents of made interesting. The observations anyway, which he had made there in his role as IN, he only described after a MfS officer who took them in turn in the Operating Information.

The document is part of a roughly 600-page collection of Stasi documents on the subject of computer games and the youth scene of the Gamer in the GDR shortly before its end. You allow far-reaching insights into the ways that the state to computer games and computer considered enthusiasts, and in the then-emerging digital age. TIME ONLINE has these files from the holdings of the Federal Commissioner for the records of the state security service (BStU) three decades after their Emergence, for the first time evaluated. We have talked in addition to Paubel with former visitors to the house of the young talents which had first reported last year, the game magazine gamestar from their memories.

thanks to the Operative Information, the number is today, at the Meeting in January 1988-present (“70 to 80 people”) and their estimated average age (“22 to 23”) trace. The IN the also reported that he was of the other young people “normal, but not suspicious” and have stated in interviews that “multiple participants have the Computer Commodore 64, and this property is considered as the basis for membership in the computer club”.

The IN had noticed the engineering design of the club, with the Commodore computers, and this Information is passed on; in the TIME present ONLINE documents, there is also a more accurate inventory list, which comes obviously from a different source. Even copies of the invoices and the purchase and sale in Köpenick, in the case of the Stefan Paubel both the C64 and the floppy drive had bought. “Probably have concerned the documentation of the HdjT-line,” says Paubel.

state organs of the GDR, were the activities of the computer clubs suspicious, was Paubel 30 years ago clearly. He not only knew what knew exactly the Stasi. And who supplied you with information.

Once was Paubel by the Director of the HdjT in whose office ordered a Paubel unknown man was sitting there already and asked him a list of names of the club members. For what government Agency the man worked, he said. Paubel pondered for a moment and then refused. A real membership, there was not anyway, the Club was open to all Interested, a lot of people were irregular, it was almost exclusively boys and men. Paubels refusal to name the names of the visitors, had no consequences, he heard of the man and his concerns, never again. The Stasi, it turns out today, knew already some of the club visitors, a list with the names and contact details can be found in the files of the MfS.

they call themselves “freaks”

In its evaluation, it is clear: The MfS has been observed in the eighties in the GDR resulting computer clubs from the beginning, in the house of the young talents since its inception in 1986. In another Stasi document, dated 15. In March 1985, and to arise from the MfS district administration Leipzig, will have already reported previously about a other club of a similar merger in East Berlin, “80 computer-interested” would have done together and also Meet in Dresden is planned. “In this connection, people involved call themselves ‘freaks'”, says the document.

home computer like the C64 is a fairly new device at that time were class: For the first Time, there were computers in homes, and at least in East Berlin (far more than in the Rest of the GDR) was the C64 from the mid-eighties, a larger spread. The Stasi monitored at the time the data security in the government and the enterprises in the GDR, the so-called Central working group secret protection (ZAGG), which also acted as a liaison organization between the MfS services. In many of these services, the resulting computer clubs, and individual members were recognized: The socialist state, whose leadership had declared the micro-electronics in the year 1977 by a decision of the Central Committee of the SED to the key industry, wanted to know what people do with their computers-making.

In the administrative district of the state security in Berlin, the head of the working group the protection of secrets (AGG), which was the equivalent of the ZAGG at the district level, customized, on 28. In November 1988, a summary of his findings in the use of distributed computing technology in the leisure sector. The four-sided, techno-rich logical amazing knowledge of the paper reads today like a view on the then-emerging information age. With the impact of the state institutions of the GDR were confronted, however: A year later, the Berlin wall fell, two years later, the GDR.

The head of the AGG in the Berlin Stasi annexe at the end of 1988 could not have guessed. In his report, was one of the Lieutenant Colonel, first of all, the MfS-known “communities of interest” of private computer users in the GDR, in addition to the HdjT about the C16-Club Dresden, the Commodore Club of Jena, and the Atari community of interest in Rostock. These workers in General, “Software exchange, as well as the variety of Hardware expansion options”.

The Stasi man warned his colleagues in other departments: “within the interest groups or computer clubs are also members, which have been proven to be a solidified negative attitude to the socialist state and social order, communities, the potential risk of negative orientation of the interest or of computer clubs. Exponents of the political underground are increasingly making use of computers whose import and procurement, for example through Church circles.” Also, some owners of private computer technology companies “( … ) an extensive trade in hardware and Software. The Software is, in many cases, copies of the NSW (non-socialist economic territory, i.e. the West, ed.), which are so common in the GDR”. From the West imported disks could land, so the fear, in computers in the VEBs; should be virus, could cause in the operation of computers, damage. The Stasi man describes a then-little-known phenomenon.

He also spoke a number of recommendations for the “preventive defence”. About the “to Clarify the conditions conducive to migration of the existing communities of interest and computer clubs through the opponent”, “Detect hostile-negative actions by individuals in connection with the use of the private computing technology” and the “identification of persons carrying on a speculative trade with Hard – and Software, primarily with prohibited Software with revanchist or anti-Communist or anti-Semitic content (sic)”.