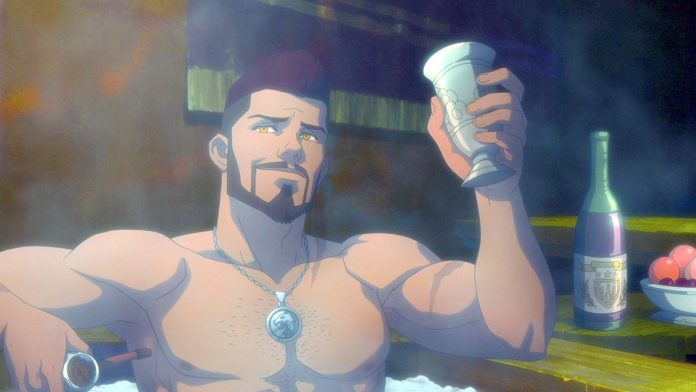 Following its unexpectedly big success with The Witcher, Netflix announced in January 2020 that it was diving even deeper into the property with an anime film called Nightmare of the Wolf. Nightmare of the Wolf won’t follow Geralt’s adventures, but will instead focus on Vesemir, his mentor and fellow School of the Wolf follower.

Netflix dropped a teaser during WitcherCon that didn’t strike me as especially remarkable, but now we’ve got a full-blown trailer to watch and I have to admit that my interest in the show is a lot higher than it was. Although this is only a small portion of The Witcher’s world, it feels lighter than the previous trailers. The White Wolf may be a silver fox but Vesemir, a young, unscarred, is five-alarm sexy. (I do find the uncanny similarity to Adam Jensen a little distracting, though.)

Speaking of unscarred, The Witcher showrunner Lauren Schmidt Hissrich said in the trailer breakdown below that she’s excited to get a look at what the world of Witchers was like before their decline, which is what we see in the games and Henry Cavill-starring Netflix series.

“When we reach season two in the live-action universe, Kaer Morhen looks almost like it was before. Because there are so few Witchers left, Witchers are disappearing. This is a major story point in season 2. It excites me to imagine what the Witchers were like, and what a larger brotherhood might look like. It’s exciting to see all these characters at once.

She also pointed out the different approach to the main characters. “In our show Geralt is extremely serious about his job, his purpose, and about protecting Ciri,” she said. We see his father figure, who was once young–I’m going rapscallion even though it makes me sound very old- and it makes me so excited that I can go back and learn where Vesemir is from and who he was before losing everything that was important to me.

Yes, this might be something I actually watch. The Witcher: Nightmare of the Wolf debuts on Netflix August 23.