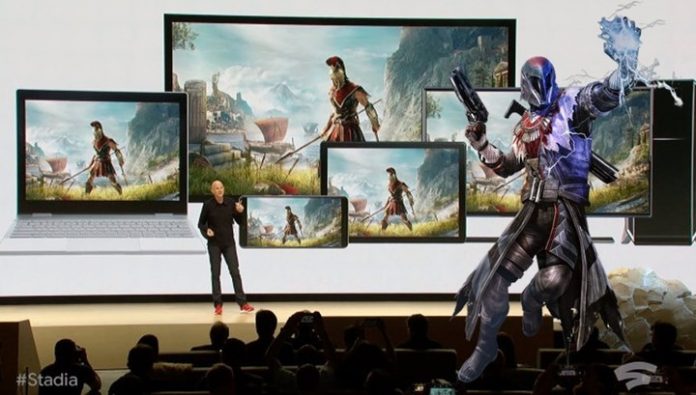 CEO of game publisher Take-Two Interactive (the game series Grand Theft Auto, Red Dead, Max Payne, Civilization, etc.) Strauss Zelnick said that the cloud gaming service Stadia overrated. During a speech at the annual conference of the Bernstein strategic decisions, the head of Take-Two said that the launch of the Stadia was slow, and the abundance of promises and the inability to perform them quickly led to frustration on the part of users.

In anticipation of the launch of Stadia, Google announced that the service will change the gaming industry. Gamers will not have to buy an expensive computer, or more affordable, but limited gaming functionality of the console: all the calculations required to render the images in the game up to 4K resolution and at 60 frames per second will be produced in the cloud.

the Technological requirements for the performance of the cloud gaming service suppose to run a AAA game even in low-power “hamboka”, just a browser and Internet access. And the required connection speed is quite reasonable – 25 Mbps.

“essence of Cloud” the new service also suggests users do not have to think about the availability of sufficient free space on the SSD or HDD as the distribution of the game and install it. Google dreamed that Stadia will be the “beginning of the gaming revolution” and “transition to a future without consoles.”

As with other cloud gaming services, ease of use Stadia often depends on the quality and cost of Internet connection. Now the service is available in the collection of just over 30 games, not so much, although the company promises that the game will be more.

Zelnick said that Take-Two has released three games (Borderlands 3, Red Dead Redemption 2 and NBA 2K20) for Stadia during the launch phase of the service, and it will continue to support streaming servISA “as long as the business model makes sense”. But he expressed concern that the target audience is people who want to play video games but don’t want to buy the console, not very big.

Zelnick also stressed that subscription services like Xbox Game Pass, Uplay+ or Apple Arcade and platform streaming type Stadia or GeForce Now is two different things, which may not necessarily be combined. Users can be a subscription model without streaming, as is the case with Game Pass, or streaming without a subscription, as in the case of Stadia. In the past, Zelnick was a supporter of streaming services and were skeptical of the subscription.

in March, Google tried to increase the number of subscribers Stadia Pro for $10 a month, give the opportunity to the owners of TV set-top box Chromecast Ultra three months free use of the gaming service, but in the same month came the news that the long-awaited shooter Doom Eternal will not support 4K in Stadia, despite the promise of the developer id Software.

Despite the difficulties, the Stadia are constantly adding new games, including PUBG, Fallen Jedi Order and Octopath Traveler. Google also announced that Serious Sam 3 will be exclusive to the Stadia in August of this year.

In April, Google temporarily made Stadia free — any owner of a Google account who signs up for the service, receive a free premium subscription Stadia Pro for two months. In the framework of the available nine projects, including Destiny 2: The Collection, Thumper and GRID. Users can buy new games, and they will remain in the library even after you cancel the premium subscription.

Google Stadia started last fall in 14 countries (Russia in this list not included). The service allows you to play through the Google Chrome browser, Pixel-smartphones, a separate mobile device made by Samsung, Razer and Asus, and Chrome OS tablets and TV with Chromecast.

POdeska Stadia Pro with full access to the directory costs $9.99 per month. As expected, later this year the company will open the basic subscription Stadia Base, but the games will be broadcast in a lower quality (up to 1080p, with stereo sound, no more than 60 frames per second).

In March, for the Russians had temporarily become a free streaming service GeForce Now, allowing to run popular and demanding on the hardware of the game on slower computers. In this way, the developers wanted to support the gamers who are forced to be in a state of isolation because of an outbreak of coronavirus infection.