“The Corsican people are dying, they are disappearing! denounced Monday the FLNC (Corsican National Liberation Front) in a press release, claiming in passing 16 attacks against second homes, construction companies or police vehicles. “What kills the Corsican people is France, the global economic system and part of our people who are complicit in it”, accuses the clandestine organization, in this document transmitted to Corse Matin.

Among these accomplices, the text notably targets Femu a Corsica, the autonomist party of Gilles Simeoni, the president of the Corsican executive, and “his desire for hegemony”. Regretting the emergence of “a form of bobo patriotism, of assumed self-satisfaction, whatever the result obtained”, the FLNC considers for example that the election of three Corsican autonomist deputies in 2017 [all re-elected during the June legislative elections ] brought “no tangible progress for the national rights” of the Corsican people.

Faced with a France whose attitude would have “rarely been so contemptuous and condescending” towards the people and the Corsican elected officials, the FLNC declares itself “extremely pessimistic” on the discussions announced with Paris and the expected visit to the island. , probably at the end of July, of the Minister of the Interior Gérald Darmanin.

During a three-day trip to the Isle of Beauty in mid-March to ease the tensions arising from the attack in prison on Yvan Colonna [finally deceased on March 21], this independence activist sentenced to life imprisonment for his participation in the assassination of the prefect Érignac in 1998 in Ajaccio, Gérald Darmanin had offered the island’s elected officials the prospect of “autonomy”.

On this theme of the institutional evolution of the Corsican community, the FLNC repeated its demands on Monday: “official recognition of the Corsican people”, “immediate transitional political autonomy” and accession to self-determination “within a five years.” “The struggle continues”, insists the FLNC, specifying that it will not be a “passive spectator of the programmed death of the Corsican people on their land”, threatened by “the colonization of settlement” which would constitute the “5,000 arrivals every year” in the island.

Denouncing “the concreteization” of the island, the agricultural land, “a new economic El Dorado, (now) overpriced”, or a tourism now dominated “by French groups”, the clandestine organization concludes its text with the claim of 16 “actions” targeting two police vehicles, two construction companies and twelve private residences across the island, including the burning of 36 mobile homes at a campsite in Aleria. 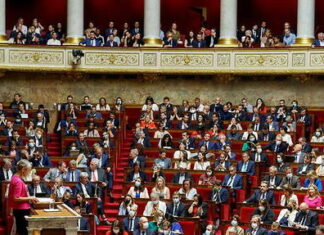