“Oak. A name that immediately resonates in the ears of collector’s watch enthusiasts, evoking Audemars Piguet’s mythical octagonal reference, launched in 1972 from the drawings of the “Picasso” of watches, Gérald Genta. However, it will not be a question here of this piece, one of the most prized in the world, but of a rare and intimate collection of timepieces. The “Oak Collection” for “One of A Kind”, first shown to the public from May 19-25 at the Design Museum in London, is owned by French collector and businessman Patrick Getreid.

A retrospective – subsequently traveling – which sweeps through the history of fine watchmaking and which is organized like an art vernissage. Indeed, for Patrick Getreide, “watchmaking is art. So I did not understand why watches did not enjoy the same status as paintings. So I decided to exhibit them as works of art,” explains the enthusiast, who over four decades has built one of the most eclectic and impressive private watch collections in the world. In total, this timepiece hunter has brought together 600 museum-quality models signed by the greatest Swiss manufacturers. A loot of cogs estimated at more than 300 million euros and considered one of the best kept secrets of the watchmaking world, until today.

“When I was a young boy in boarding school in Switzerland, I lived among the children of the richest people in the world. I felt no jealousy, but I wanted to be like those people. I called it the Count of Monte Cristo syndrome. A determination to achieve a level of success that would give me the freedom to do the things I loved,” he explains. A successful bet for the businessman who fell in love with fine watches when he was ten years old. Seeing an Omega in the window, his passion was born and he was able to acquire the piece thanks to his small savings and the help of his parents. A model that he unfortunately lost today, but which he quickly replaced with a Tank from Cartier, bought following a successful equestrian bet. “I then started buying watches at prices I could afford. Gradually, this amount increased and the models improved. The passion for collecting has become stronger,” says Patrick Getreide.

A hunt for the watch that took place wherever the collector and detective of tocantes went. “I traveled all over the world and was always looking for the rare pearl. But it was at a flea market in France 35 years ago that I think I got my best deal when I found a Patek Philippe in 130 Sector steel,” he recalls. Its collection has the characteristics of being in a perfect state of preservation – a key purchase criterion for Patrick Getreide – and of unveiling watches that have retained their original components. All are unique special orders or extremely rare limited editions, as the retrospective reveals.

Of the 600 pieces that make up the “Oak Collection”, 160 watches, both vintage and contemporary, have been selected for the exhibition. A series of purpose-built rooms in London’s Design Museum will take visitors through an epic journey comprising eleven sections, from pocket watches to grand complications to simple three-hand wristwatches.

The route gives pride of place to the creations of Patek Philippe – six rooms being dedicated to the Geneva house -, the favorite brand of the collector who asked the watchmaker to carry out numerous special orders for his benefit. Older models of the manufacture are also in the spotlight, in particular references having belonged to renowned figures, such as Eric Clapton, Jean-Paul Belmondo or even the patron, banker magnate of the railroads Henry Graves Jr. with five of his watches. Three other spaces are dedicated to Rolex with unseen and never seen pieces from the brand to the crown.

Finally, in addition to star brands and stars among brands, the retrospective will also show Patrick Getreide’s passion for independent manufacturers, like François-Paul Journe or the Finnish Kari Voutilainen. 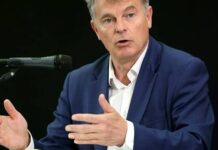 Legislative: the PCF invests its 50 candidates, including Fabien Roussel