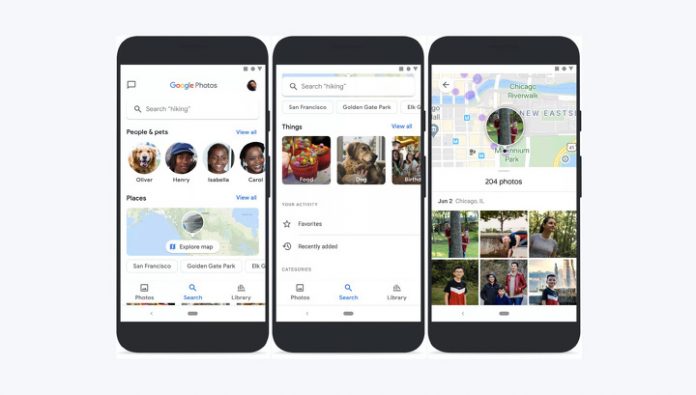 Google has spent the first five years of a large-scale redesign of the service Google Photos for storage and organization of photos. The application, which is used monthly by over a billion people, updated everything from the structure and interface to the logo-turntables.

the structure of the “Google Photos” was simplified and now consists of only three main tabs. On the tab “Photos” (Photos) assembled all stored in the cloud content have larger thumbnails, the video plays automatically, and the top shows a carousel of memories.

the “Search” Tab (Search) allows you to quickly search for people, places and objects, and includes the main new feature is an interactive map. In the “Library” (Library) are all the basic tools for managing media collection, including albums, favorites, trash, and archive.

Google stressed that the interactive map was one of the most anticipated features since the launch of the service in 2015. Now, if the user allowed the camera application to determine the location, his images will automatically appear on the map in the section “Places” (Places). Users can see the locations where they traveled and where did the most of frames and search by them.

In the film “Memories” (Memories), which was added to Google Photos last fall, there are more new formats. Now it includes the best images of the user, his friends and family, travel and the brightest, according to algorithms, events last week.

in addition, the “Memories” were transferred animations, collages, stylized photos, mini-videos and other automatically generated content service. Previously it was located under the tab “For you” (“For you”) that no longer exists.

the Logo of “Google Photos” in the form of turntables is also updated. He changed the shape of petals and in General made more flat.

a New version of the app have already started to circulate on iOS and Android. All users it will be available next week.