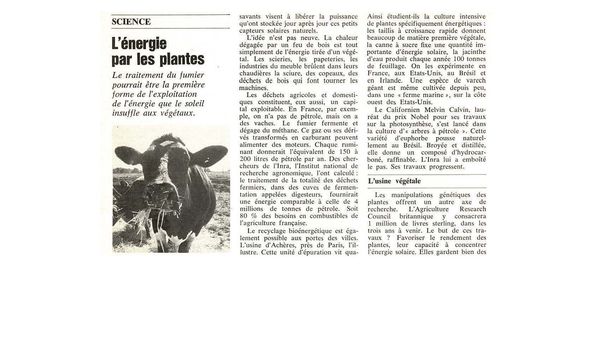 The manure treatment could be the first form of exploitation of the energy that the sun gives the plants.

Sun superstar. It will take the spotlight this year, in France and in Europe. Spaces for tomorrow has decided to devote him a great show. Many associations assist him, with industrial, Chambers of commerce and public Authorities. The program, concerts, shows, exhibitions, seminars, balls and games. The selected day is the 23rd of June, the feast of the summer solstice.

the purpose of The operation ? Raise awareness, show the French the benefits of solar energy. To be better prepared, an information campaign will be launched in schools, the first day of February, and on the 15th, in the town halls. Valéry Giscard d’estaing will come down also in the arena : it waits for a next Council of ministers of communications on this new form of wealth.

It is a dream, although she may not take of as soon as the next generation of coal or oil. But it can become an action the economic, enter little by little in the daily life. One of the main ways that open is the exploitation of the energy that the sun gives the plants.

This is a mine green. The trees, the plants, the algae transform sunlight into chemical energy. Thanks to it, they thrive. They have provided the man, since the dawn of time, the totality of his power. Today, in the world, scientists aim to unlock the power they have stored, day after day, these small solar collectors, natural.

The idea is not new. The heat generated by a wood fire is simply the energy derived from a plant. Sawmills, paper mills, industries in the furniture burn in their boilers sawdust, shavings, wood waste who run the machines.

agricultural waste and household are, also, a capital usable. In France, for example, there was no oil, but it has cows. The manure ferments and gives off methane. This gas or its derivatives as the processed fuel can power engines. Each ruminant would give the equivalent of 150 to 200 litres of oil per year. Researchers from the Inra, the national Institute of agronomic research, have calculated : the treatment of all waste farmers, in fermentation tanks called digesters, to provide an energy comparable to that of 4 million tons of oil. That is, 80 % of the fuel needs of French agriculture.

The recycling bioenergy is also possible on the doors of the cities. The plant of Achères, near Paris, the illustrious. This unit purification, lives almost in a closed circuit. It treats the sewage of 6 million people. The residue ferment, thanks to the micro-organisms they contain. They annually produce the equivalent of 15 000 tons of oil, which helps run the plant.

These examples show the way to the Office of the solar energy. It funds this year, with the Inra, a program of energy recovery from agricultural waste. Anticipated Budget : Chf 10 million. The european Community economic dedicated, it, 17 per cent of its credits, “solar power” to the study of the green energy.

We can go further. The sides of the Inra and of the subsidiaries of the atomic energy commission (C. c. a.), Renault and Pechiney, the serious School of mines has launched studies on the exploitation and valorisation of the wood. Pierre Laffitte, the director, sees great : “If the research works, thanks to advances in biotechnology, the France could have, in 2020, the equivalent of 100 million tons of oil, with its 20 million hectares of wood and coppice”. Assumption school, because to fully exploit these reserves dévasterait also the country.

In the world, the scientists are therefore looking for techniques to tame and focus the energy of the plant. And are studying the intensive cultivation of plants specifically for energy : coppice of fast growing give a lot of plant raw material, sugar cane, fixed a significant amount of solar energy, the water hyacinth produces each year 100 tons of foliage. It is the experiences in France, the United States, Brazil and Ireland. A species of kelp, giant is even grown recently, in a “ferme marine”, on the west coast of the United States.

The Californian Melvin Calvin, winner of the Nobel prize for his work on photosynthesis, launched in the culture of”tree oil”· This variety of spurge grows naturally in Brazil. Crushed and distilled, it gives a compound of hydrocarbon, raffinable. The Inra has followed suit. Its work is progressing.

The genetic manipulation of plants offer another axis of research. Agriculture Research Council, uk will devote £ 1 million, in the three years to come. The purpose of this work ? Help the performance of plants, their capacity to concentrate the solar energy. They keep many secrets. The first “leaf artificial”, carried out in a laboratory in 1977 by Dr. Joseph Katz, the United States, still remains a pale copy of what succeeds in nature : every leaf is a factory plant.

This range offers the science, achievements and projects, is not a utopia. She is not proposing the unthinkable, that is to say, power plants are huge. She believes in small units of production of green energy. Which egirl waits for an immediate profitability. Philippe Chartier, master of research at the Inra, he also, in this area, on the small streams that eventually form rivers. According to him, France can dispose immediately of the equivalent of nearly ten million tons of oil, in the form of gas, fuel or fuel. It is sufficient, for this, to use more rationally the thickets, forests, agricultural by-products and household waste.

It would be good enough to bring that new energy into daily life. Already, the Finns and the Italians undertake the testing of cars operated with a fuel non-conventional. Already, the Brazilians are trying to mix it with the gasoline of ethanol, an alcohol obtained by distilling sugar cane. It is perhaps the impact of the Day of the sun that France will have to put a green plant in its engine.

the archives of The Express

Archive, as chosen by the Documentation of the Express.