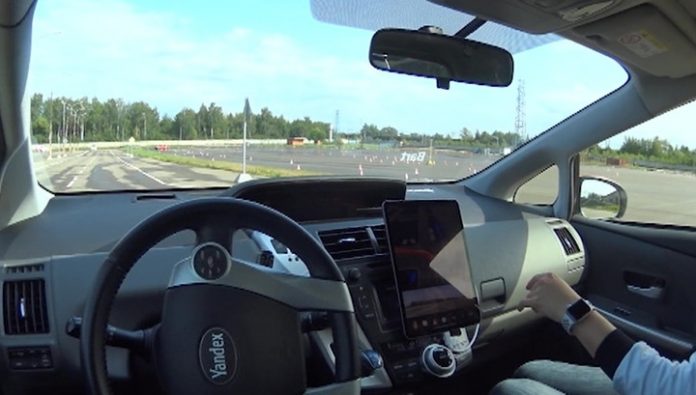 “Yandex” has presented a new, fourth generation of their drone. The car was developed in conjunction with Hyundai Mobis, a “daughter” of the Korean automaker, the Hyundai Sonata. This is the first Russian search engine experience is not an independent adjustment of the finished machine, and create a new one in partnership with the automaker. They say that this generation of drones is cheaper, and the sensors on it more.

Since the advent of the first generation, which “Yandex” has begun to test three years ago, the appearance of the drone has changed significantly. Has become more compact unit mounted on the roof — it is a classic lidar (laser range finder) and radar. Three lidar, but solid state, no moving parts, are built right into the body of the car. And on the perimeter, there are 10 cameras. They became not just more — they differ in different focal length, to control different zones and collect more data.

Actually, a lot of things in terms of integration became possible including thanks to the joint work with engineers from Hyundai Mobis. For example, the car set a more powerful generator. Just because a drone is actually a computer on wheels, and a computer powerful enough to real time to digest terabytes of data from all these sensors and cameras, analyze them and make decisions. And all these lidars also need electricity. To “Sonata” when the test cars used hybrid Toyota Prius, could be built-in traction battery. Now, do you have solely a generator.

an Important point: at the dawn of the testing of drones critics of technology strongly focused on the fact that the set of sensors and computers for signal processing is almost four times more than the machine itself. On the circle were about $ 150,000. In “Yandex” it is said that now the construction of the drone are quite comparable pon costs with the contents of a pair of drivers who could work in shifts.

“We from the second [generation] decreased in two times. The second [generation] it cost less the a hundred [thousand dollars], now we even fell twice. By and large, when the car weight wrong equipment and it can drive itself, it turns out the new object with properties equivalent to a car with two drivers. And this thing is already more profitable than the salary of two drivers.”

“Yandex” plans to a new generation of drones on the streets in all the Russian cities where it is testing their cars. Moscow (there are several such vehicles already go) and “Innopolis” in Tatarstan. Part of the promise to attach to an unmanned test fleet in the US. By the end of this year, the company expects to receive at least 100 new machines.

“we Have a plan to increase the fleet at least twice this year. A year we walked with a hundred machines, that is, at the end of the year we will have two hundred or more worldwide. This year we are increasing the fleet only due to the Sonata. That is, the old and new machines at the end of the year our fleet will be roughly equal. In the future we will increase our R&D fleet at the expense of these machines. When talking about the mass introduction, there are other figures. Will be a different story: mass production will provide different prices for the sensors and generally the whole kit.

of Course, we are interested to negotiate with all so that the cars have from the factory was equipped with all necessary equipment. So we can fill your software, periodically update and maintain, and no longer be distracted by time-consuming mechanical work. But it is a question three-four-five years from the current time. For R&D purposes we are trying to understand where to position the sensors, so we do it here, and automakers are helping us to “talk” with iron on odlanguage.

And briefly about drones. In April Vladimir Putin has instructed the government to develop standards by which unmanned cars will start to allow on public roads unaccompanied test engineer. That is, they will finally become fully Autonomous. These rules were supposed to prepare by the end of may, but as they say in “Yandex” because of all coronavirus was moved to the end of August.