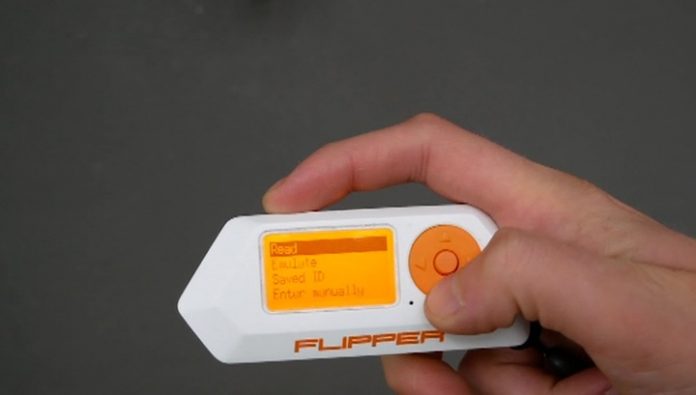 Russian experts on cybersecurity hack multitool Tamagotchi. The device is able to scan various radio wavelengths. With its help, you can try to hack the system “smart” home Wi-Fi network, and clone access cards and NFC chips and door keys. For cards with physical access to the computers have USB ports all in one compact package with built-in battery and display, i.e. it is mobile and Autonomous. Potential buyers – so-called pen-tistory professionals, who test the burglar systems cyber defence, are actually hackers, but legal.

Paul Avner, founder of the multitool Flipper Zero: “You do commissioning and exploring how well-made this system in this particular office building, how well-spaced accesses and all that. And you order not to drag the mountain equipment write down some typical factory keys. Do you want to see removed contractors factory keys, set up the distinction between this section of the building, and this reacts as a system to the cards of different access zones. You need to understand you have mounted the contractor any system outages or the rise of the barrier, and you want to know strong it or break device for $2. You, as a researcher, as a customer, can easily see immediately understand what the system is and then build on it, to develop attack, to make a fast some conclusion.”

According to the Creator of this multitool are now professionals in the field of security often have to use improvised devices, and to carry and awkward user interface they have is not the most intuitive, so they decided to construct a device based on a Raspberry Pi, a popular hardware for robotics enthusiasts, adding a few components. It should be understood that an untrained person to crack something using such a device is unlikely to succeed; rather, it for those who already knows, wants to learn.

Paul Avner, founder of the multitool Flipper Zero: “Now popular devices like the Raspberry Pi is such a platform for teaching programming, electronics, very popular. The world has sold millions of Raspberry Pi, despite the fact that real people who need a small single Board computer not much. There is a certain threshold for representation, when you bought this card, I filled in some program and there is flashing lights. All, anything you make with it can not. And we can bring you some debugging on the screen, I can hear some kind of signal, to control a radio-controlled car, to see how signals from different remotes, as the TV switch, some kind of automation to try to do that, we have a device that is useful out of the box”.

Well, Gukovskaya joke – this whole multi-tool is a Tamagotchi as a pet – flipper the Dolphin, which is powered by the key identification Wi-Fi networks. A Dolphin is a reference to the Dolphin-cyborg from cyberpunk story johnny Mnemonic, but the flipper is the name of a Dolphin from a children’s cartoon, much like the Ball in relation to the dog. Now the device costs about $100 on Kickstarter, available for sale if there will be, it will cost a bit more, however, the authors were happy with the first version and the second is prepared with advanced functionality, in terms of advanced management attacks on infrastructure.